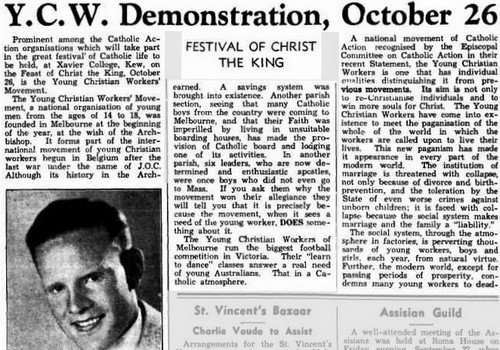 This month marks the 80th anniversary of the formal establishment of the YCW in Melbourne, the first Australian diocese in which the movement was launched with the support of the local bishop.

In fact, some local YCW parish “sections” had been operating since 1939 with some experimental groups even earlier.

Nevertheless, 8 September has traditionally been recognised as the anniversary, a date apparently chosen by chaplain, Fr Frank Lombard, in honour of the birthday of Our Lady.

Six weeks later, the movement was planning for its first rally at Xavier College, Kew, to be held on 26 October 1941, as the Melbourne Advocate reported.

Action was already a feature of the early YCW “sections.”

“In one Melbourne parish, a flourishing section has been built up of young men previously not practical Catholics. The leader saw that it was the menace of dead-end jobs which was demoralising his young comrades,” the Advocate says.

“In another parish, the leaders’ group realised that the majority of young workers were wasting a large part of the money they earned. A savings system was brought into existence.

“Another parish section, seeing that many Catholic boys from the country were coming to Melbourne, and that their Faith was imperilled by living in unsuitable boarding houses, has made the provision of Catholic board and lodging one of its activities.

“In another parish, six leaders, who are now determined and enthusiastic apostles, were once boys who did not even go to Mass. If you ask them why the movement won their allegiance – they will tell you that it is precisely because the movement, when it sees a need of the young worker, DOES something about it.

The Young Christian Workers of Melbourne run the biggest football competition in Victoria. Their “learn to dance” classes answer a real need of young Australians. That in a Catholic atmosphere.”

Since then the Australian movement has continued to form thousands of young worker leaders across the country.

Tipping the world on its head