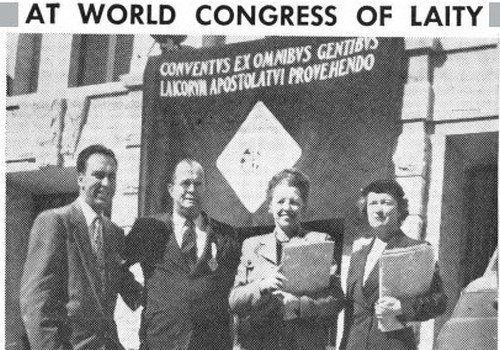 This month we celebrate the 70th anniversary of one of Cardijn’s greatest triumphs, i.e. his keynote speech to and decisive influence over the First World Congress on Lay Apostolate in Rome from 7-14 October 1951, which helped set the stage for Vatican II.

Recalling Cardijn’s keynote speech entitled, “The World Today and the Lay Apostolate,” Brazilian Bishop Helder Camara would later characterise Cardijn’s ” complete panorama of the great issues of the present time” as having a “very great impact” on him, “one of the greatest of my life.”

In the longer term, however, the most important impact of Cardijn’s speech and the work of his allies was the change in perspective introduced by the Congress.

As Stefan Gigacz writes in an article recalling the Congress and Cardijn’s contribution, “the Congress proved to be a defining moment, introducing two major shifts in perspective that would come to fruition at Vatican II.”

First, it introduced the JOC’s reality-based see-judge-act as the method of work at the Congress instead of the traditional doctrinal approach beginning from Church teaching.

Secondly, and equally if not even more important, it introduced Cardijn’s conception of lay apostolate as the role of the lay person transforming the world “in his personal life, in his family, professional, social, cultural and civic life, on the national and international planes” rather than in terms of personal piety, charitable and even social action.

In this sense, Cardijn’s speech anticipated both the conception of lay apostolate that would be adopted by Vatican II in its Constitution on the Church, Lumen Gentium, and Decree on the Lay Apostolate, Apostolicam Actuositatem, as well as the see-judge-act method adopted in the Pastoral Constitution of the Church in the World of Today, Gaudium et Spes.

Indeed, Cardijn’s conception of a “new apostolate” for the emerging “new world” also directly foreshadows the concept of “new evangelisation” that would be adopted by the CELAM bishops at Medellin in 1968.

Stefan Gigacz, The leaven in the Council, Joseph Cardijn and the Jocist Network at Vatican II (Australian Cardijn Institute)

12 pastoral priorities for the Ecclesial Assembly