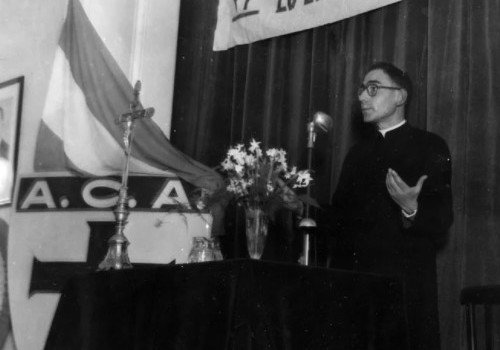 Born on 3 December, 1920, he was the last of 22 children of his Italian immigrant parents, José Pironio and Enriqueta Rosa Butazzoni.

At the age of eleven, he entered San José de La Plata Seminary. Twelve years later he was ordained on 5 December, 1943.

For fifteen years, he then taught literature, Latin, philosophy and theology successively at the Pío XII Seminary in Mercedes.

During this period, he also wrote regularly for the JOC chaplains’ magazine, Notas de Pastoral Jocista, where he was also a member of the editorial team.

From 1953-55, he studied theology in Rome, completing a doctoral thesis on the work of Belgian Benedictine monk, Dom Columba Marmion.

In 1958, he was appointed vicar-general of Mercedes Diocese. Soon after he became professor of theology at the new Catholic University of Argentina of which he became rector in 1963.

During this period, he also served as chaplain general to Argentine Catholic Action where, according to Claudia Carbajal, “his opportune word formed the lay conscience for a determined presence in the world and in their daily life to radiate the Good News in the commitments of the believer in daily life.”

In 1964, Pope Paul VI appointed him as auxiliary bishop to the diocese of La Plata, enabling him to take part in Sessions Three and Four of the Second Vatican Council. In 1972, he was appointed bishop of Mar del Plata.

In 1967, he was elected Secretary-General of the Latin American Episcopal Council (CELAM), enabling him to play a key role in the CELAM conference at Medellin, Colombia in 1968. From 1972-75, he also served as president of CELAM.

During the turbulent 1970s which ended in military dictatorship, he came under strong attack from conservative forces in Argentina.

Pironio also took part in several Synods of Bishops meetings, including the 1974 Synod on Evangelisation in the Modern World where he was one of the General Rapporteurs. In this capacity, drawings on the writings of the Argentine jocist priest, Lucio Gera, he contributed significantly to the drafting of Pope Paul VI’s Apostolic Exhortation, Evangelii Nuntiandi, particularly the section on evangelisation and culture.

In 1975, Pope Paul appointed him as Pro-Prefect of the Vatican Congregation for Religious and Secular Institutes and a year later he was made Prefect after being made a cardinal.

On 8 April 1984 Pope John Paul II named him President of the Pontifical Council for the Laity in which position he helped promote the first World Youth Day events.

As Austen Ivereigh has written:

Cardinal Pironio can be considered in certain aspects the precursor of Bergoglio. His mission was to apply the principles of the Second Vatican Council to Latin America; he had a clear “preferential option” for the poor, but he also distrusted ideologies and was convinced that the Gospel represented the basis of a new model of society that went beyond the capitalism-communism dichotomy. As Bergoglio would later, he alienated himself from conservatives by committing himself to social justice and alienated himself from the left by denying support for extremist versions of liberation theology.

Like Bergoglio, Pironio was not a revolutionary, but he had great spiritual depth: he was a radical defender of the Gospel, with a pastoral strategy that gave priority to the poor.

Stefan Gigacz, The Pontifical Council for the Laity de-recognises the IYCW (Cardijn Research)

Thanks to Claudio Remeseira for providing information and background for this article.