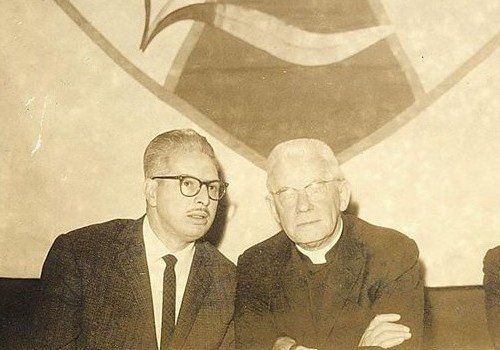 Born on 20 November 1925, Bartolo began work as an apprentice turner in a small auto parts factory at the age of fourteen. Here, Bartolo met young Emídio, a YCW leader, who introduced him to the YCW in the Mooca neighbourhood of Sao Paulo.

Soon, he became involved in union action to defend the dignity and improve the working conditions of young workers in his factory.

Elected national president, he also helped launched the YCW in neighbouring Uruguay. In 1957, he attended the International YCW pilgrimage to Rome and First International Council.

Working with Cardijn, he advocated on behalf of the IYCW from the beginning of Vatican II in 1962, helping contact and lobby many bishops friendly to the YCW, particularly in Latin America.

In 1964, Pope Paul VI appointed him as a lay auditor to the Council in which capacity he continued to assist in the drafting of the Decree on Lay Apostolate, Apostolicam Actuositatem, and the Pastoral Constitution on the Church in the World of Today, Gaudium et Spes.

After completing his term with the IYCW, he returned to Brazil with his wife, Candida, moving to Porto Alegre, where he studied pedagogy and became a vocational teacher.

Upon his retirement, he remained active as a member of an Association of Retired Teachers in Private Schools in the state of Rio Grande do Sul, remaining a fierce defender of the rights of the elderly all his life.

He also remained close to the YCW, editing the Boletín Solidariedade, for former YCW members. He also helped compile a book on the history of the Brazil YCW, Juventude, Trabalho, Vida: uma história de desafios – JOC no Brasil, 1935 a 1985.”

From 1997-2000, he also took part in the IYCW History Project, contributing greatly to the volume on the history of the YCW in the Americas.

Candida predeceased Bartolo, dying on 17 May 2015.