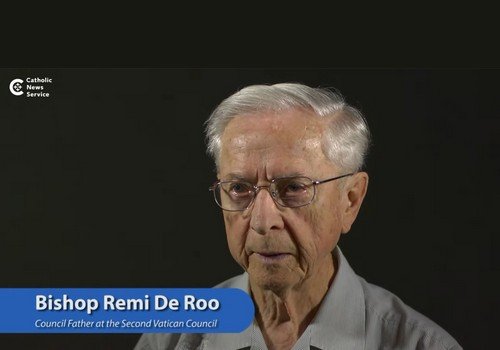 Born in Manitoba, Canada of Flemish Belgian parents on 24 February 1924, Remi De Roo first met Cardijn while a seminarian at the time of the 1947 YCW International Congress in Montreal.

Ordained in 1950, a year later he was appointed director of Catholic Action for the Diocese of St Boniface, Manitoba. Later he served as parish priest at Holy Cross parish.

Aged only 38, he was appointed by Pope John XXIII as bishop of Victoria, British Columbia in October 1962. This enabled him to attend all four sessions of Vatican II.

During the Council, he worked closely with Cardijn, delivering a significant intervention on the role of the laity.

In his memoirs, he recalled the battles Cardijn had faced at the Council.

“At Vatican II, Cardinal Cardijn confided to me that he never fully succeeded in getting “those Romans” to grasp the true nature of specialized (meaning the apostolate of like to like) Catholic Action. They failed to grasp how it was directed primarily towards the transformation of society through Gospel values. It was not meant to be oriented towards the strengthening or promotion of Church structures as such. I remember him bemoaning the fact that in the commission in which he participated during the Council, he had found it practically impossible to get the members to understand the true nature of Catholic Action.

After the Council, he became a strong proponent of social action and liberation theology and a critic of capitalism. He was the main force behind the 1983 Canadian bishops’ statement “Ethical Reflections on the Economic Crisis,” which stated that the “goal of serving the human needs of all people in our society must take precedence over the maximization of profits and growth.”

When YCW leaders in Brazil were arrested in 1971-72, he wrote letters on their behalf. He was close friends with Margaret Bacon, IYCW secretary-general, who later married Brian Burke.

As bishop, he was also criticised for his management of diocesan finances. Eventually, however, the investments he had made proved sound.

He also broached the subject of married priest and women priests with Pope John Paul II, who accepted Bishop De Roo’s resignation within weeks of his reaching the official retirement age of 75.

Sadly, according to reports from abuse survivors’ groups, it also appears he was not immune to the temptation to place protection of priests and the church above the safety of the young and the vulnerable in his care.

Reforming Tradition: A Conversation with Remi De Roo, June 21, 2018 (Centre for Studies on Religion and Society, University of Victoria)

Witnesses to the Council (University of St Paul, Ottawa)