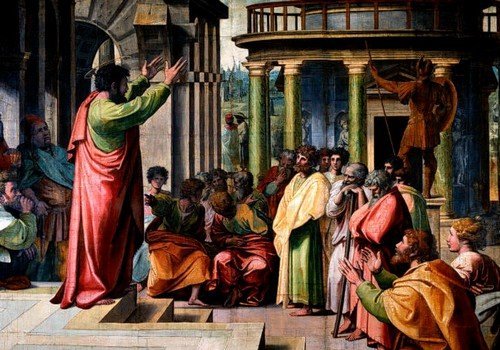 During his recent trip to Greece, Pope Francis met with priests, religious, seminarians and catechists in the Cathedral of St Dionysius in Athens.

Recalling the example of St Paul preaching to philosophers in the Areopagus, Pope Francis noted that an attitude of acceptance is essential to evangelisation.

Such an attitude “does not try to occupy the space and life of others, but to sow the good news in the soil of their lives; it learns to recognize and appreciate the seeds that God already planted in their hearts before we came on the scene.

“Let us remember that God always precedes us, God always sows before we do. Evangelising is not about filling an empty container; it is ultimately about bringing to light what God has already begun to accomplish,” the pope said.

“He did not tell (the Athenians): ‘You have it all wrong,’ or ‘Now I will teach you the truth.’ Instead, he began by accepting their religious spirit. … He draws from the rich patrimony of the Athenians. The Apostle dignified his hearers and welcomed their religiosity.

“Even though the streets of Athens were full of idols, which had made him ‘deeply distressed,’ Paul acknowledged the desire for God hidden in the hearts of those people, and wanted gently to share with them the amazing gift of faith.”

“The pope finished with a phrase he often uses. Speaking of St. Paul, he said: ‘He did not impose; he proposed.’

As Michael Sean Winters notes in the National Catholic Reporter, “this is the pedagogy of accompaniment.”

“It can scarcely be labeled ‘heretical’ or ‘confusing,’ as some conservatives are wont to do. It is rooted in the example of St Paul. And, as we know from all the biographies of the pope, and from watching him these past years, it is a pedagogy that has allowed him to engage the culture in arresting and profound ways.”