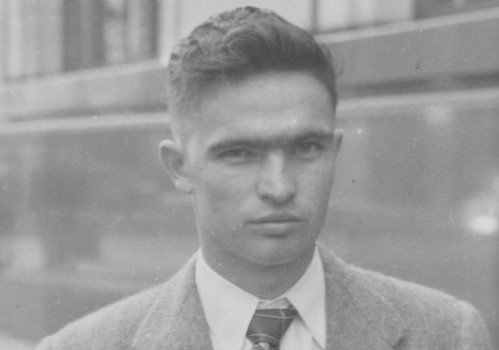 Bernie Docherty, a former YCW leader from Melbourne, who went to work as a YCW extension worker in India, died on 26 January 2022. While in India, he met his future wife, Philomena Dubier, also a YCW leader from Madras (now Chennai).

Below we present the eulogy delivered by Bernie’s daughter, Ambika (Roseanne), at his requiem mass at St Cecilia’s Church, Glen Iris, on 10 February 2022.

(Excerpts from the Eulogy at the Requiem Mass for the repose of the soul of Bernard Docherty, held on 10/2/22 at St Cecilia’s church, Glen Iris)

After a long battle with ill health, we bid farewell to Bernie Docherty snr.

In 1934 Bernie was born in Geelong and raised in Carlton, Melbourne, to Mother Cecilia and Father Bernard Docherty. He had one younger brother Noel.

He was educated at St George’s school in Carlton and liked to follow the fortunes of his favorite football club Carlton.

Growing up, Bernie enjoyed playing cricket and umpiring the game, he watched boxing and he also enjoyed going out and dancing at the local dance.

Bernie went on the first International pilgrimage to Rome in 1957 and had a great trip.

After returning home he settled back into the old routine until the YCW Victorian State Conference in 1958. There, National Chaplain Fr K Toomey put the challenge to delegates to go to Asia and help the YCW there. This idea appealed to Bernie, so he spent some time to save his money almost two years later he packed up and went to India in 1960. In Bernie’s own words, he said he was just an ordinary fellow…but he had an extraordinary opportunity to visit Asia as a YCW volunteer extension worker.

Meanwhile, around the same era in India…

In 1942 Philomena was born, the eldest child of Patrick and Rosemond Dubier. Philomena grew up and was educated in Chennai, then Madras with her three younger sisters, Rita, Audrey and Dorothy.

In her teenage years Philomena also became a YCW member in Chennai.

It appeared that one of her responsibilities was to meet and greet the foreign YCW delegates!

Also in India at that time was a young Fr Ernie Smith.

Fr Ernie was our family friend for over 50 years. He went on to establish the St Kilda Mission in Melbourne.

Betty King, was also a YCW member in India, and remained a close friend for Philomena & Bernie.

And Fr Little, who later was installed as the Archbishop of Melbourne, reigning for 22 years.

The other Australian delegate in India at that time was of course, Bernie! Philomena met Bernie, and they worked together at meetings and activities of the YCW…but their passion clearly went way beyond the YCW movement! Bernie initially signed up for a two year stint in India but stayed for three years!

They courted in Chennai and Bernie sought permission from Philomena’s father to take her hand in marriage.

They were engaged and later married on the 8th of September 1963.

Philomena’s family was not happy.

Her father cried that this bugger was going to take his daughter to a far away, unknown land. Patrick Dubier had every right to be concerned as Australia was still in its early stages of dismantling its White Australia Policy. Bernie returned from his three-year service in India with his new wife to the fanfare of reporters and newspaper articles, such was the novelty of an Indian person arriving in Australia at that time.

Together Bernie and Philomena were instrumental in introducing Indian food to Australia. From personal experience, Philomena realized the need for chili and spice in Australia. At that time, typical Australian cuisine was highlighted with salt, pepper and tomato sauce. Not even yoghurt was readily available in the shops.

From 1973 to 1999 Philomena and Bernie ran their Docherty Catering Business. They started in the Van Ness Ave house, before running functions in Coburg, followed by Hedgely Dene Reception Centre in Malvern and St Michael’s in Ashburton. They ran cooking classes in their catering kitchen in Oakleigh. Bernie and Philomena took cooking class tours to India and during this time, in 1987 Philomena launched her cookbook “Some Like it Hot”.

With Bernies support, Philomena has helped many of her relatives to migrate to Australia and welcomed them with open arms. Those who have migrated from India to Australia have said that they would not be living the life they lead in Australia if it wasn’t for Uncle Bernie.

Bernie was a good man who always tried to make choices based on Christian values and the YCW principles.

During the last few weeks we have received so many compliments about Bernie; that he was always smiling and kind. He was inclusive and welcoming. He acknowledged people’s presence. He had a cheeky sense of humour, if you were quick enough to understand his jokes!

2021 was not a good year for Bernie. He spent nine months either in hospital or rehab, and due to the covid pandemic we were unable to visit for many of those months. Bernie did not complain. The rehab staff said Bernie was a good patient, trying hard in the rehab sessions, but there were only so many set backs he could bear.

At the age of 87 yrs, on January 26th, Australia Day and India’s Republic Day Bernie left us. What a symbolic day for him to depart from this earth. Even in death, he tremendously reinforced his allegiance to both countries.

Philomena and Bernie were an inseparable couple. They met over 60 years ago and were happily married for 58 of those years. They hailed from different countries and cultures, but they were united by their faith and love. They spent their careers working together, they lived and loved and prayed together.

It will be hard to imagine Philo without her Bernie.