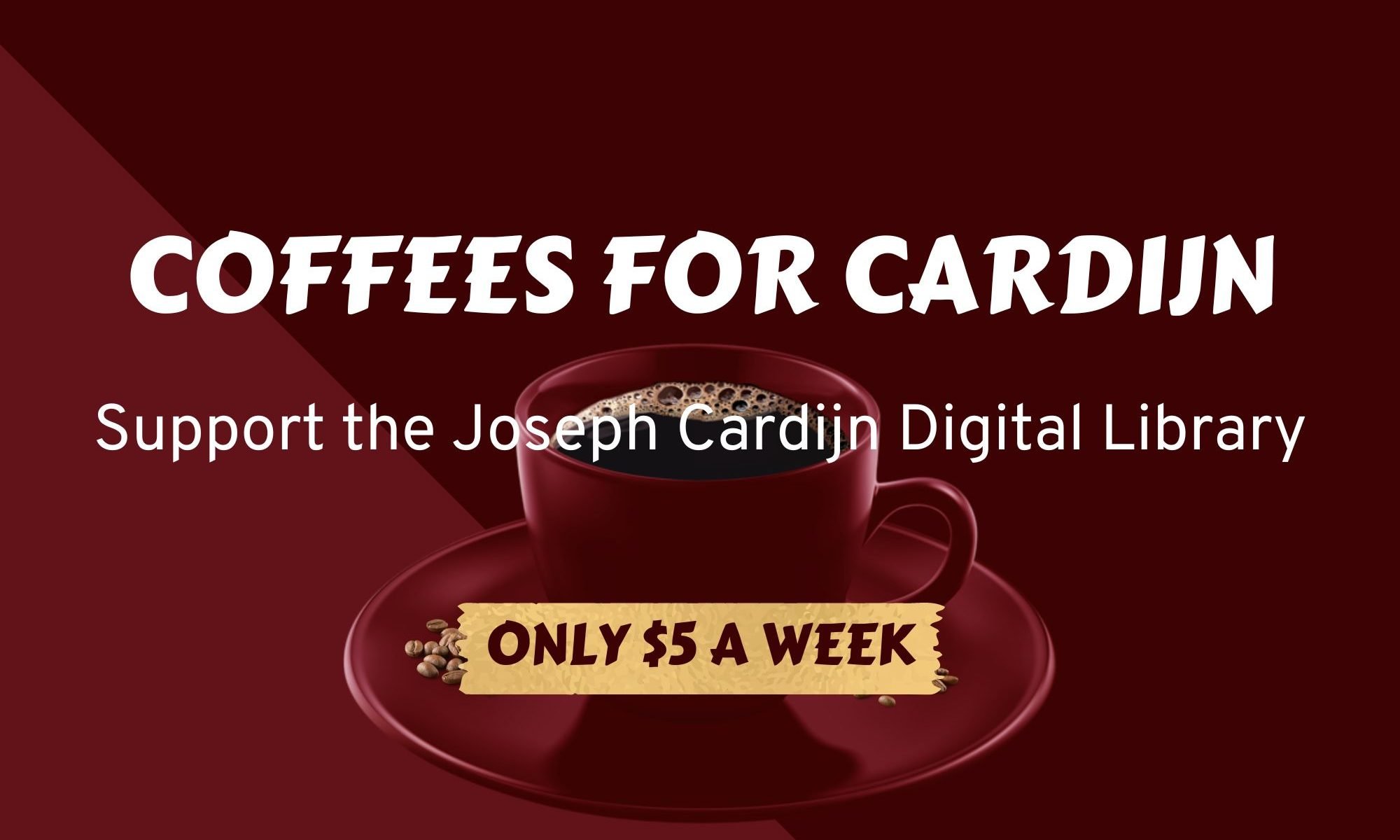 A good time, we hope, to launch our Coffees for Cardijn Appeal inviting you to make a regular contribution of the price of a cup of coffee towards the Joseph Cardijn Digital Library, the online repository devoted to Cardijn’s life and work, including his speeches and writings, biographies, etc.

The aim, of course, is to make his writings available once again to present and future leaders of the YCW, YCS and other “see-judge-act” movements and initiatives inspired by the Cardijn model.

Nearly 3000 Cardijn documents and items are already online in French and English. A Spanish site is under development.

So far this year, the site has averaged over 1570 visitors per month – more than 50 per day – in a strong indication of the library’s utility to leaders, chaplains, mentors, youth ministers, community leaders, researchers and others.

All of this work to date has been done by volunteer labour. But the task is rapidly growing beyond our efforts. We need to ensure the library’s longevity and its future development. And regular donations provide a regular cashflow, enabling us to plan ahead.

Hence this Coffees for Cardijn Appeal seeking a regular donation of the price of a coffee per week. Or in these challenging economic, we’ll be equally grateful for a monthly or even one off donation.

And if you do have the means, please give even more generously! Young workers, students and lay apostolate pioneers of today and the future will thank you! 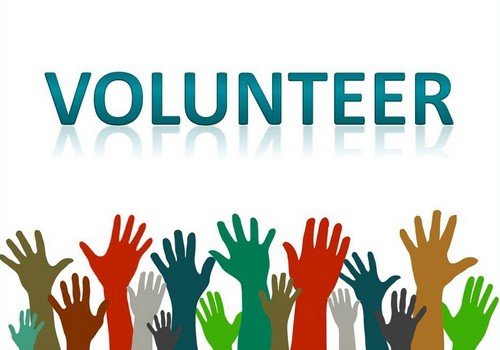 It’s already more than a year since ACI launched the Joseph Cardijn Digital Library in its current form in August 2020.

To date the site has received nearly 16,000 unique visitors, averaging 40 people per day over the course of this year. Those visitors have recorded nearly 106,000 document views.

What’s more, the JCDL ranks in second place in Google searches in many countries, ranking only after Wikipedia.

It has thus become the leading source on the web for reading Cardijn’s writings and learning about his life and work.

Yet, as Cardijn would no doubt have said himself: “We are still at the beginning!” There is much more to do.

In this article, I will trace the development of the JCDL from its origins and set out some of the challenges for the future, including particularly the establishment of a volunteer team to take the site to the next level.

When I was working for the Australian YCW back during the 1980s, it was already difficult to find copies of Cardijn’s writings.

There were a few copies around of the book he had written for the Second Vatican Council, “Laypeople into Action” (Laïcs en premières lignes). But that was a more theological book, which was not very useful for animating YCW groups and forming leaders.

Luckily, we still had a few copies of “The Young Worker Faces Life,” an English translation of “Le jeune travailleur, la jeune travailleuse devant la vie” published by the Melbourne YCW in 1961, of a 1949 lecture series on the basics of YCW formation.

And we made roneoed copies of an old edition of Cardijn’s 1948 lectures entitled “The Hour of the Working Class,” which is a translation of “L’heure de la classe ouvrière.”

I also knew of a book of Cardijn’s writings, “Challenge to Action” that had been published in English during the 1950s. But copies of this were very hard to find.

Later, when I worked for the International YCW from 1988-93, I found that many countries were in a similar situation.

Outside of Europe especially, many YCW leaders had never seen Cardijn’s writings. Or they had never been translated into local languages. Or, if they were translated, the translations had been lost.

For example, when I was working for IYCW Asia-Pacific, I was told that some of Cardijn’s articles had been translated into Chinese. But no-one knew where to find copies!

As a result of this, a few years later when I was working for the International Cardijn Foundation from 1997-2000, I started to slowly gather as many of Cardijn’s writings as I could find, scan them and publish them on the web.

Then, in 2011, I started to do my PhD research on Cardijn and I needed to compile a representative selection of Cardijn’s writings from over the course of his life in order to study the evolution of his thinking. I was able to locate many of these writings in Cardijn’s personal archives in Belgium’s Royal Archives, at the IYCW and in other libraries and archives.

During this research, I was also able to find translations into English of around 50 Cardijn articles in the archives of the English YCW in London.

All this took a huge amount of time and work. In fact, it took more than the first year of my research. Most researchers could never devote this amount of time on such a project.

Thus, not only were Cardijn’s writings inaccessible to YCW leaders, chaplains and others but also to researchers.

So in order to make these more widely available once again, I progressively scanned the articles and posted them on the website: www.josephcardijn.com, which was originally a simple Google Site.

Meanwhile, I have also learned that there are literally thousands more articles by Cardijn that are still “lost” in archives and libraries.

Many were published in small Belgian newspapers and magazines, which can now only be found in specialised historical libraries or in Cardijn’s personal archives, which are stored in the Belgian National Archives.

In addition to all this, every year from 1931-57, he delivered a series of lectures at a national JOC leaders training school held every year at Godinne, Belgium.

The Young Worker Faces Life and The Hour of the Working Class were just two of this series in 1948 and 1949. None of the others are available in print today – not even in French.

In addition, Cardijn corresponded with many people. He wrote and received literally thousands of letters to and from people around the world. Many were of no great significance except to the person concerned. But many also have a great historical value.

Some of Dom Helder Camara’s letters are extremely important, for example. On 17 September 1965 Camara wrote to Cardijn proposing that some Vatican II bishops should take a vow to consecrate themselves to the poor and the working class as Cardijn had done.

This was the origin of the “Pact of the Catacombs” signed by 40 Vatican II bishops, who committed themselves to the poor and to live a humble lifestyle.

Eventually, there were around 500 articles in French with another 100 in English and the original site outgrew a simple Google Site. A professional software solution became necessary.

Fortunately, my daughter, Kiara, is a computer science student. She was able to develop a new site using specialised repository software known as Omeka S (https://omeka.org/) for us as her university study project.

The Australian Cardijn Institute has taken on the job of financing the web hosting costs.

Much more work remains to be done to improve the graphic design, create a better index, update the software and many other things.

But finally we have the capacity to grow the site and to develop it into other languages. Moreover, we already know that many of Cardijn’s documents already exist in Flemish or Dutch. But they need to be located and scanned.

At least some of Cardijn’s articles have also been translated into various other languages. In fact, several people have already asked me when a Spanish site will be available.

We are going to need a team of people with a variety of different skills in order to take this project further.

If you have the time and would be interested to become part of such a team, please contact me at: aci@australiancardijninstitute.org.