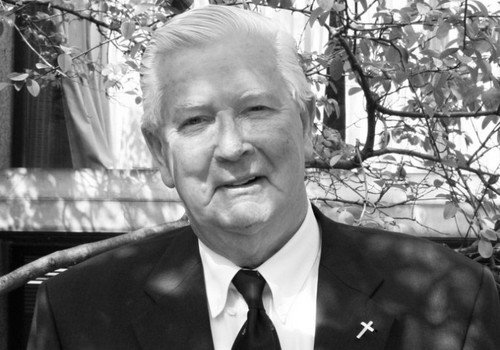 Regarded as an inspiring parish leader for over six decades, an educator, and a prison and youth justice chaplain, he founded Catholic Social Services Victoria (CSSV) and was a member of the Australian Catholic Social Justice Council for 15 years.

When I was in the YCW in Fawkner in the 1960s, Kevin Mogg was the curate at St Pius’ in West Heidelberg.  He was a legend in what was a very challenging parish, based on the old 1956 Olympic Village, into which the Government moved families from the inner-city slums. It had a very strong parish and a parish YCW well able to serve the youth of a tough neighbourhood.  Its football teams were the most successful across the northern suburbs, at least, and they produced some notable footballers, including the Collingwood great, Peter McKenna. This was a place where football was just not a sporting service, but a connection with the wider community.

I heard a lot about Kevin Mogg in the 1960s because one of our parish YCW chaplains, Fr Joe McMahon, was a great mate of his. (We had two chaplains, one for the Girls YCW and one for the Boys YCW.)  Joe McMahon died five years ago, a priest of 54 years. His nephew, Fr Joe Caddy, is the Vicar General of the Archdiocese of Melbourne.  Our other chaplain, Fr Don Burnard, left the priesthood and kept the faith. He died in January 2022, aged 90. Joe McMahon and Don Burnard were inspirational, just like Kevin Mogg was in West Heidelberg.

Readers of these newsletters will know that we often write about former YCW chaplains who have died.  Some of them have gone on to higher office and greater responsibilities in the Church, but whether they did or not is beside the point.  These three priests, like dozens of other priests of their generation in and around Melbourne (and many more outside Melbourne) might be called Cardijn or Jocist priests, but, more accurately, they were Vatican II priests. Most of their formation in the seminaries and after ordination was during the Vatican II years. In Melbourne, at least, the emergence of the outward-looking lay apostolate of Vatican II started before Vatican II was called in January 1959 by Pope John XXIII.

The great success of the YCW in Australia was found in parishes where there were a lot of young workers, from 14 or 15 years though to 20 or, maybe, 21. The young chaplains were able to engage with this group because they were, for the most part, from ordinary, and often large, working class families. It kept them grounded. The decline of the YCW is often put down to sociological factors impacting on young people (especially increased mobility through car ownership, greater entertainment options, and higher school retention rates), but a significant and often overlooked factor is the loss of priests like Kevin Mogg, Joe McMahon and Don Burnard.

CSSV board chairman, Bernie Cronin, remembered Fr Kevin as “a true servant leader” who worked tirelessly towards a better and “encouraged very many others to share a sense of belonging and to take action towards a more just, equitable and compassionate society.”