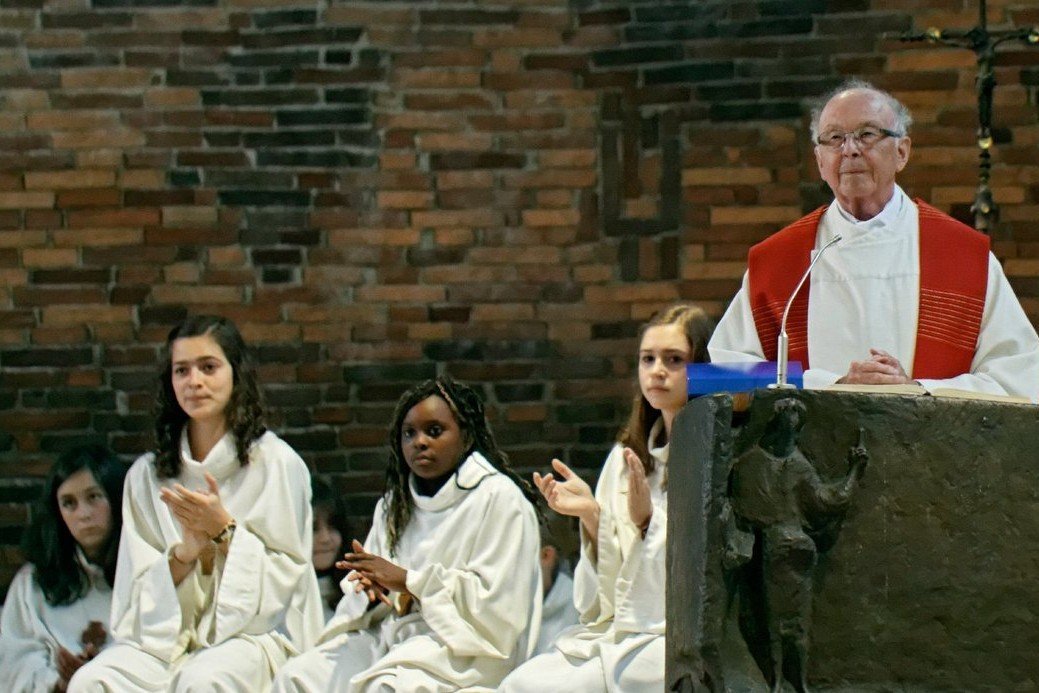 This is a powerful Easter call for peace in Ukraine delivered by German Jesuit, Fr Paul Schobel, a former diocesan YCW chaplain and worker priest as well as a member of the Pax Christi movement.

“PRESERVE PEACE – LAY DOWN THE WEAPONS!”

The names of little known places are now added to the list of towns and villages around the world that are associated with the worst war crimes. Bucha, Busova, Makariv – to mention just three – already represent thousands, perhaps even tens of thousands of murdered civilians in Ukraine: knocked off their bikes, tied up, violated and deliberately executed. Decomposing corpses line the streets. There is no one here who is not filled with disgust when mass graves have to be dug and dead bodies identified. No wonder that in our country, too, more and more people want to put an end to these atrocities by using military force and striking with tanks and grenades.

Once again we are experiencing the dull instincts that war unleashes in people – the sadistic desire to violate, torture and bestially massacre others. There is no war in human history in which marauding, demoralised troops do not drag a trail of cruelty and horror behind them. For a long time, people did not want to admit what the supposedly honourable German Wehrmacht1 had done in its campaigns.

There is no question: war criminals must be caught and brought to justice. However, I am not at all surprised that such crimes happen during a war. Why is that? Because war itself is a crime. No war simply breaks out, as the German vernacular would have us believe. Every war is broken out. And in the most recent case, too, this crime is logistically prepared, promoted by propaganda and then brutally pushed forward. Now, once again, tens of thousands on both sides are dying completely senseless deaths. Russian mothers are also weeping for their fallen sons. The skeletons of destroyed houses rise like ghosts into the sky. Survivors search through the rubble for a few belongings, then flee and set off for an uncertain future. Those who remain run for their lives as the sirens wail. Crying children in bunkers and underground tunnels, wailing women and desperate, even angry men. Our thoughts today are with the long-suffering people in Ukraine. And there is still no end in sight. The call for weapons and heavy equipment to beat back the aggressors is becoming louder and louder.

War – the worst abomination in human history – is once again raging on the political stage, almost on our doorstep. We thought it had been permanently consigned to mothballs. We did not wish to see the systematic preparations, the sabre-rattling of the warmongers and their predecessor wars. Now it’s here – and it’s no longer the same old monster2 that the older people here still know. That was bad enough. Now it has been pimped out with a terrible arsenal of new weapons. Now there are nuclear warheads and poisonous grenades in its cellar. It’s hard to imagine what would happen if a madman pressed the “red button”. All it takes is one mistake and we’ll all burn up in a nuclear inferno or suffocate miserably. It seems to me that the survival of humanity is currently hanging by the thread of a refusal to obey orders. And I hope and pray to God that, in an emergency, responsible military leaders will refuse what idiots order them to do.

Our disgust, our revulsion, our anger, our indignation is directed at those who build such death machines in East and West and now bring them into action. Instead of reaching out to each other for reconciliation and trusting coexistence after the peaceful revolution3, instead of developing a new security architecture together, the military blocs have been armed and expanded, so that we now face each other eye to eye, staring each other down with weapons. We are no longer certain whether NATO will not be drawn into this conflict or whether it will fall into the deadly trap itself. Then, God have mercy on us, we will have a “Third World War,” which will probably be the last.

It is becoming increasingly obvious that if humanity does not finally learn and politically implement how to settle conflicts humanely and without violence, its fate is sealed and it is only a question of time. The spiral of violence and counter-violence will drag it into the abyss. We only have one chance left, namely to break this chain and banish war, this miserable failure, this political zero from the face of the earth. It has never changed anything for the better – at best, this only happens in the negotiations afterwards, when a post-war order must be agreed upon over mass graves and smoking ruins. One asks oneself: Why not before? Why was it necessary to murder, plunder and crush before talking to each other?

War, this monster, is unsurpassed in primitiveness and decadence. Every war is a relapse into inhumanity. It ignores the fact that human beings are generally endowed with hearts and brains. I understand clearly that some have a stone in their chest and a cavity in their head. But why do we let the heartless and brainless, of all people, set the agenda? And come up with no better idea than to keep returning violence with violence?

War is never a political option, it only brings death and ruin, destroys people’s bodies and souls. Heavily traumatised, more Vietnam veterans have taken their own lives than actually died in the war. “Fallen” – another sham word. They didn’t stumble, they were mown down. How often as a young pastor attending the deathbeds of World War II soldiers did I experience the eruption of what they had concealed inside them for years. That in death they still needed to expiate what they had done on the battlefields and what they had suffered there. “We have become animals, murderers, we have ceased to be human beings,” is how Erich Maria Remarque described his experiences on the Western Front of the First World War. Every war is a betrayal of becoming human. As a Christian, I would add that it is a slap in the face to God, who created us in his image and likeness.

Only non-violence is disarming. And that is what we stand for in the peace movement. Anyone who believes that we can cast out the devil with the devil in chief is stupid. Jesus of Nazareth warned us urgently about this. The two will soon make common cause. War inevitably brings war. “Darkness cannot drive out darkness,” once preached the unforgotten pastor Martin Luther King, and he continues: “Only light can do that. Hate cannot drive out hate. Only love can do that. Violence increases violence. The chain reaction of evil must be interrupted. Otherwise we will fall into the abyss of destruction.” The unforgettable Berta Suttner, once mocked as “Peace-Berta”, puts it in a nutshell with her words: “It will not occur to any sensible person to wash away ink stains with ink, oil stains with oil. Only blood is ever attempted to be washed away with blood.”

I know that Christian love of enemies is a requirement, the absolute pinnacle of Jesus’ ethics. Many baptised people, including bishops, like to cheat their way around it. And yet it is the only thing capable of stopping the chain reaction of violence: If, instead of striking a thug in the face, I offer him the other cheek, he will be shamed and irritated. Because his strategy has not worked.

Now the fact that we have laughed at peace research for decades and have not practised effective strategies of non-violent defence is taking its revenge on us. Some fear that this means defencelessness and surrender. Yet non-violent action is the most powerful weapon because an entire people rises up, surrounds tanks, induces error on the part of the aggressors, engages them in talks and demoralises them to such an extent that they don’t know what to do. If they were shot at, they would know what to do. In 1968, when Russian troops invaded Prague, only a few people died because they resisted without violence. In 1989, Horst Sindermann, the chairman of the GDR4 Council of Ministers, had to admit: “We were ready for everything that evening, except candles and prayers. They left us defenceless.”

With a fraction of these one hundred of billions that are now being squandered on rearmament (the champagne corks are already popping among the arms dealers!), one could train whole contingents of peace workers, as a “standing army”, as “blue helmets” of a very special kind – not “at gunpoint”, but with proven methods for non-violent resistance and peaceful conflict resolution. They would be able to make the use of force so absurd and ridiculous that it would ultimately fizzle out without effect. I don’t know if such concepts are still being applied in the Ukraine conflict. Such strategies cannot be improvised, they would have to be deliberate and rehearsed.

No one here will seriously question the right of self-defence for Ukraine. But renowned military experts doubt whether military counter-defence can lead to success. If at all, then only at the price of further senseless bloodshed on both sides, at the price of scorched earth and endless suffering. All that will be left of Ukraine will be a silhouette on the map. Each additional arms delivery prolongs the misery and multiplies the deaths. But above all, a despot like Putin would not simply accept defeat, but would launch a nuclear counter-attack to drag whole sections of humanity into his own downfall. Police call this “extended suicide.”

“Imagine there is a war and no one turns up,” a joker recently sprayed on a wall. A joker? He is right: we must refuse war. As peace activists, we are used to being ridiculed as naive. But those who are naive today are those who still believe that wars can be won. Every war is lost with the first shot. Because in today’s interconnected world, there’s nothing to win, everyone can only lose. Almost everyone has realised that by now, at least at the petrol station! We are all being bombed back decades by this war. Even more people must now starve to death. Every starving child is a murdered child who accuses us with wide eyes. Because arms kill without war!

It is time for a genuine “change of era.” A different one than that proclaimed in Berlin5. It is the following: “Lay down arms!” War is so yesterday! War is over! We never tire of marching for peace, of beating the drum for peace.

As a “Jesuit” I rely on the biblical motto: “Do not be overcome by evil, but overcome evil with good.” (Romans 12:21)

We are here today to uphold a vision of a just and peaceful world in the midst of a wretched war. This cannot be destroyed. No more than the One whose resurrection I plan to celebrate with my congregation at the crack of dawn tomorrow.

1The German army under Hitler.

2Fr Schobel is referring to the experiences of aged persons during the World Wars of the 20th century.

3The fall of the Berlin Wall and the reunification of Germany.

5On 27 February 2022, the German government proclaimed a „change of era“ and set aside 100 billion euros for rearming. 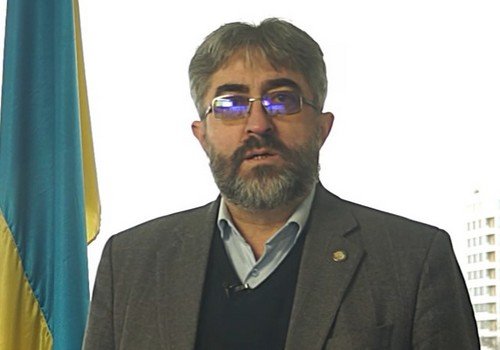 Dr Yuriy Pidlisny PhD, head of the Department of Political Science at the Ukrainian Catholic University in Kyiv and a member of the Ukrainian Pax Romana affiliate, Obnova, has issued an appeal for solidarity.