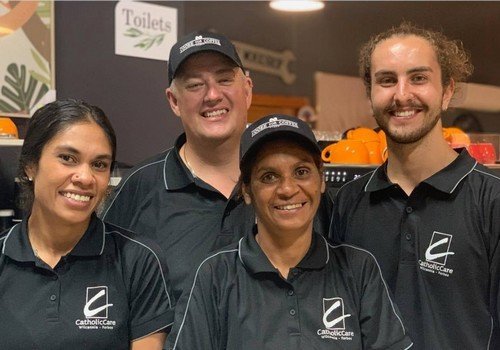 Almost five years ago, the Bishops of Australia made an earnest plea to support the disadvantaged members of the community in the 2017-18 Social Justice Statement Everyone’s Business: Developing an Inclusive and Sustainable Economy:

“As people of the Gospel, we have to be concerned about growing inequality, and especially about the situation of the more vulnerable in our community. Among them are the lowest-paid in the workforce, those forced to subsist on meagre income support, people suffering housing stress and homelessness, and our Indigenous brothers and sisters who continue to endure chronic levels of hardship.”[i]

While there is still much to do to address inequality and social hardship, an initiative in the Diocese of Wilcannia-Forbes is having an enormous impact on regional communities, helping locals to find employment and purpose in their lives.

Established by CatholicCare Wilcannia-Forbes, “Cooee for Coffee” provides training and employment for people living in some of the most remote parts of Australia.

CatholicCare Wilcannia-Forbes CEO Anne-Marie Mioche says the initiative came about from a desire to assist those in need of employment in a way that supports the local community.

“There’s very high levels of disadvantage in the Diocese of Wilcannia-Forbes, and in places like Wilcannia real jobs are very difficult to access,” she explains.

Regional coffee shops and cafés, often the lifeblood of small towns and communities, tend to be run by transient workers, Ms Mioche says. As a result, when the owner leaves town, the café closes and the community loses one of its few gathering spaces.

“The last time a café closed we applied for a grant because we wanted the café to be owned by the community and to create jobs for people in the community,” she says.

“We won the grant and that started our coffee van in Wilcannia, which has been incredibly successful.”

The Cooee for Coffee van immediately became a training centre aimed at directly helping those impacted by financial hardship, substance abuse and domestic violence, providing individuals with an opportunity to break the cycle of disadvantage and to become economically secure.

“The coffee van’s success gave us the courage and the vision to want to do it in other places and so when an opportunity came up in Bourke, we thought would give it a go,” Ms Mioche says.

The initiative’s significant positive impact in the local community has prompted CatholicCare to setup more local stores. A third coffee venture is on the horizon, with Sylo’s Cooee for Coffee expected to open for business in May, while plans are underway for opening a second-hand clothing shop in Wilcannia to meet an urgent community need.

In fact, it was Bishop Columba Macbeth-Green OSPPE, Bishop of Wilcannia-Forbes, who identified a local need for quality second-hand clothes after the departure of Sr Maureen Healey RSM, who had previously run a second-hand clothing store in Wilcannia.

“Wilcannia is an isolated community,” Bishop Columba says. “The nearest town is Broken Hill, which is a two-hour drive.

“Since Sr Maureen left Wilcannia in 2019 there has not been a clothing store in the community. I think it is so important to a person’s self-esteem to be able to have something nice to wear as well as the practical purpose of clothing.

Bishop Columba says the work of CatholicCare in the diocese is having a major impact on the lives of many.

Between 20 and 30 local staff have been employed through the program since the Wilcannia coffee van opened in January 2020. For many of those employees, working at Cooee for Coffee has been their first job and has represented a turning point in their lives.

The employees at Cooee for Coffee learn a range of practical skills, such as barista techniques and food safety, but of arguably greater importance are the life skills they develop along the way.