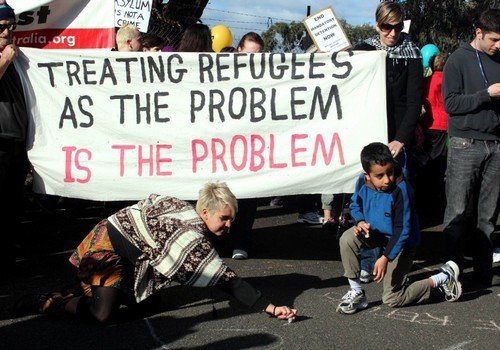 Sydney Catholics are proposing to establish a new “Catholics for Refugees” group to tackle the many problems and issues affecting asylum seekers and refugees in Australia.

“[O]n the 7th of April, 2020, our historic group that included over 60 organisations including the Australian Catholic Bishops Conference of Australian, a number Bishops from NSW, NT and Queensland, Catholic Religious Australia (CRA), the peak body for more than 5,000 members of Religious Orders; and the CEOs of several major Catholic health and social services providers wrote to Prime Minister, Scott Morrison, to applaud his government for showing leadership and agency in the face of this global pandemic,” Fr Smith writes.

“We also raised two groups of people that remain on the margins of our community and vulnerable to both the predations of the Covid 19 virus and the despair that comes with such vulnerability.

“Those groups were the 1.5 million temporary visa holders in the Australian community, the refugees held in onshore detention and the over 100,000 asylum-seekers living in the community. While the pandemic made all our lives more insecure, it made the lives of these families nearly impossible. It is hard to imagine that in a wealthy country like ours there are over 100,000 people that have zero access to any form of social security, any medical support or low-cost housing – marginal doesn’t begin to describe their position in our country.

“As I’m sure you have all noted, the various State Premiers and Chief Ministers have responded with a raft of financial packages and support, not enough certainly in light of the need, but gratefully received, nevertheless.

“Sadly, the Federal government has done next to nothing outside the announcement that temporary visa holders could access up to $10,000 of their superannuation. As the pandemic drags on and the economy slows even further, life becomes more precarious for these most vulnerable families.

“Despite the grim outlook, what has become very clear to us and obviously many of you, is that there is a new spirit of generosity, courage and outrage within Catholics across Australia, a spirit that is demanding a better Australia and more from all of us.

“We saw that emerge when we sent out our request for those interested to sign on to the letter to the Prime Minister. Your collective response was so encouraging and heartening, as were your many words of solidarity, that we have decided to take things further.

“Catholics for Refugees is really a movement of people who want action to make the lives of refugees and asylum seekers better.

“I guess it might be useful to say what this idea, Catholics for Refugees, is not. It is not a peak organisation, or a formal alliance, or new organisation.

“It is an idea that reflects the fact that Catholics – in organisations, Religious Orders, parishes and those who have left the church altogether but are still drawn to the social teachings of the Church – want to do something to restore integrity, humanity and legality to our country’s treatment of refugees both here and in off-shore detention. It recognises that real, sustained social change happens through an ecology of responses and strategies and that that starts with knowing we are not working alone, despite how siloed we can sometimes become.

“So here’s our very loosely formed idea/plan that we would really love you to consider and think about as we listen to the whisperings of our heart, the leadership of Pope Francis and the call of our God to get informed, get connected and get organised to use our voices for those who have no voice.

“A more humane outcome for those seeking Australia’s protection requires coordinated thinking and action at all levels:

“Supporting action in local Catholic For Refugees groups across Australia.

“Collaborating with the ACBC, religious orders, NGOs, schools, dioceses and service providers to welcome and protect the stranger, and engage our political leaders to do the same
Investigating the possibility of humane and practical remedy within Oceania to respond to the rising numbers of displaced people within our own neighbourhood.

“Catholics For Refugee groups would be set up in electorate areas and meet regularly to organise and plan action they will take. From meeting with MPs, to running events and supporting campaigns – the options on how the group makes a change are endless. Actions could range from organising food, phone cards and support for asylum seekers in the community, to writing a Letter to the Editor, speaking at schools and lobbying MPs and local members. The great thing is the group decides what its own priorities are.

“The collaborative work idea is still in the early days of developing and imagining what this strand of work might involve so our first step will be to host a meeting – perhaps face to face or zoom if not – with all those interested in this aspect of the work including all those who have begun this journey together through the joint letter to the Prime Minister.

“If this is of interest to you, your organisation, parish, community group or family please contact Julie Macken (Julie.macken@sydneycatholic.org) and we will find a time and date to get together and create this aspect of the work,” the letter concludes.