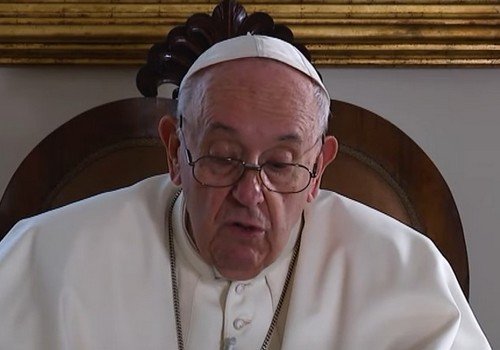 In a powerful speech to the Fourth World Meeting of Popular Movements, Pope Francis has insisted that while personal change is necessary, “it is also indispensable to adjust our socio-economic models so that they have a human face, because many models have lost it.”

And thinking about these situations, I make a pest of myself with my questions. And I go on asking. And I ask everyone in the name of God.

I ask all the great pharmaceutical laboratories to release the patents. Make a gesture of humanity and allow every country, every people, every human being, to have access to the vaccines. There are countries where only three or four per cent of the inhabitants have been vaccinated.

In the name of God, I ask financial groups and international credit institutions to allow poor countries to assure “the basic needs of their people” and to cancel those debts that so often are contracted against the interests of those same peoples.

In the name of God, I ask the great extractive industries — mining, oil, forestry, real estate, agribusiness — to stop destroying forests, wetlands and mountains, to stop polluting rivers and seas, to stop poisoning food and people.

In the name of God, I ask the great food corporations to stop imposing monopolistic systems of production and distribution that inflate prices and end up withholding bread from the hungry.

In the name of God, I ask arms manufacturers and dealers to completely stop their activity, because it foments violence and war, it contributes to those awful geopolitical games which cost millions of lives displaced and millions dead.

In the name of God, I ask the technology giants to stop exploiting human weakness, people’s vulnerability, for the sake of profits without caring about the spread of hate speech, grooming, fake news, conspiracy theories, and political manipulation.

In the name of God, I ask the telecommunications giants to ease access to educational material and connectivity for teachers via the internet so that poor children can be educated even under quarantine.

In the name of God, I ask the media to stop the logic of post-truth, disinformation, defamation, slander and the unhealthy attraction to dirt and scandal, and to contribute to human fraternity and empathy with those who are most deeply damaged.

In the name of God, I call on powerful countries to stop aggression, blockades and unilateral sanctions against any country anywhere on earth. No to neo-colonialism. Conflicts must be resolved in multilateral fora such as the United Nations. We have already seen how unilateral interventions, invasions and occupations end up; even if they are justified by noble motives and fine words.

This system, with its relentless logic of profit, is escaping all human control. It is time to slow the locomotive down, an out-of-control locomotive hurtling towards the abyss. There is still time,” the pope said.