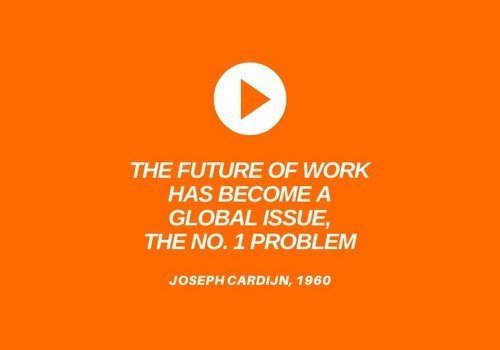 Last month (and before the Pope’s message), we contacted the project with a view to participating in a project that falls short of a Universal Basic Income, but which may achieve the same objects, at least in some economic systems (such as Australia’s). Proving that universal wage and welfare safety nets can work in wealthier economies can provide a way forward for emerging economies. The text of the approach to the Future of Work project included an outline of the two parts of the research being considered.

The first would focus on the rights of workers to a just wage and other employment conditions and protections, with particular emphasis on the rights of workers who do not have secure and full time work, ie workers in the gig economy. In Australia minimum wage rates are based on full time work of 38 hours per week. “Casual” workers, that is those who have no ongoing employment rights, typically receive a casual loading of 25%, which is partly based on compensation for not having paid holidays and sick leave. The impact of the Covid-19 virus on industries with a high degree of casual employment (hospitality and retail, mainly) has demonstrated that casual workers in those industries who are required to stay away from work through illness or who are not engaged because of depressed custom are effectively left without proper support and are not able to readily access unemployment benefits. This part of the research might be called the wages (or employment) safety net.

The second part of the project would look at the social safety net and its capacity to be integrated with the wages safety net so that casual and gig economy workers may be supported by the social safety net when they have inadequate work. In general, casual workers who are unable to secure sufficient work are entitled to a means-tested unemployment benefit, but it is bureaucratic, lacking flexibility and set at poverty levels. These kinds of problems have led some to argue for a Universal Basic Income. However, this second part of the project would look at other measures that are capable of providing sufficient support for workers. It would not be based on a rejection of the concept of a Universal Basic Income, but would contain the critical elements of the concept (through income and services providing for adequate food, health, housing, education, etc), perhaps demonstrating that taking the steps towards a Universal Basic Income would be feasible.

One of the drivers of this research would be the need to develop a more effective way of supporting workers with family responsibilities; and to provide the social framework where couples can commit to raising a family without the fear of poverty. This is an important consideration arising from Catholic Social Teaching.