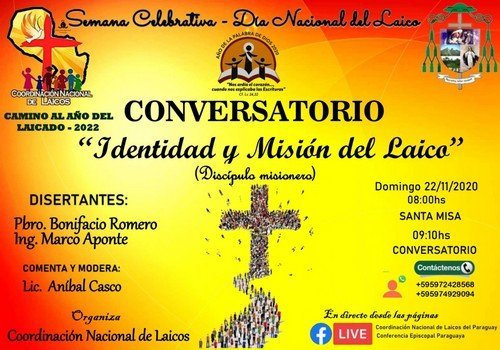 Paraguay’s bishops launched a Year of the Laity on the Feast of Christ the King, Sunday 21 November.

“In 2022 we invite you to continue like those disciples of Emmaus, who ‘instantly set out to proclaim Christ’ (cf. Lk 24, 33-35). In the light of this Gospel we want to remain open to what the Lord wants to say to us and dedicate a new time of reflection on the being and mission of the laity , who ‘are men and women of the church in the heart of the world and men and women of the world in the heart of the church’

“We must give priority to evangelisation,” the bishops noted in a statement at the end of their General Assembly. “Furthermore, it is necessary to evangelise the field of politics and politicians, according to the proposal of the Church’s Social Doctrine, so that they love the country and not just their interests”.

Looking at the situation in the country, the bishops called, among other things, for agrarian reform and real dialogue with a concrete and in-depth approach to solving the problems related to land tenure and ownership.

“We are in a very difficult context, there is no clear proposal or adequate support for the development of peasant and indigenous family agriculture, an agriculture that provides food to people; rather, large-scale agriculture is preferred for export,” the statement continued.

“We see a lack of opportunities for the poor. Many of the laws passed by state institutions are to the detriment of the poorest. We are concerned about the lack of dialogue and listening.”

Given this context of social inequality, the bishops emphasised the importance of the family as a stable basis of society, and call on the state to promote and accompany them, considering the creation of a family ministry appropriate.

And they warned of a worrying increase in homicides, feminicide, robbery and assaults.

“The government and the responsible institutions must redouble their efforts to restore peace to our people,” the said.

“The Paraguayan Bishops’ Conference proposes to dedicate the year 2022 to the laity,” they concluded. “This pastoral initiative is an opportunity to address the great issues of national and ecclesiastical reality and to take actions that allow for personal conversion and social change by strengthening what is already being done in the dioceses of the country.”

The Bishops: “We must give priority to evangelization and also necessary to evangelize the field of politics and politicians” (Foreign Affairs Co NZ)

Inauguration of the Year of the Laity: “on the way to proclaim Christ” (Fides)