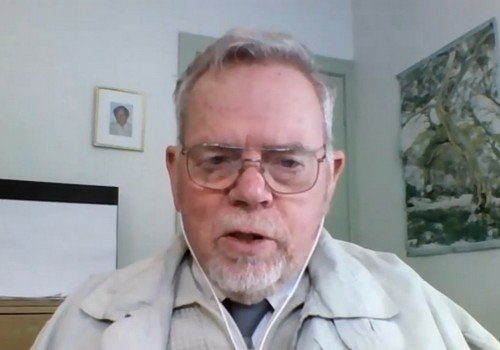 In this article reproduced from the Yarra Theological Union Alumni Digest, Fr Bruce Duncan CSsR, who is retiring as a lecturer at YTU but not from academic life, reflects imaginatively on his “conversations” with Pope Francis.

For some years I have been acting as the literary agent in Australia for Pope Francis, and in a recent phone call I was chatting with him about how so many women and men around YTU were inspired by his writings, and trying to revision the mission of the Gospel today. He was delighted to hear this, and wanted to know more about YTU. I said YTU readily understood his notion of ‘mission’ as attending to the cry of the poor and of the earth, and involved everyone, especially in their civil vocations and roles. As he has said, the church does not exist for itself, but to serve in the tasks of social as well as personal transformation as the metaphor of Reign of God beckons us.

Francesco (he prefers to use first names) asked me how our Plenary Council was going, and if people understood how necessary was synodality, ‘walking together’ as he termed it, to increase transparency, co-responsibility and participation as much as possible. He warmed to his topic, saying that the Catholic Church needed a good ‘shake up’ lest it look like a ‘museum’ or a quaint relic from the past.

He said that we must learn to listen more attentively to the Holy Spirit urging us to extend further our concern to the excluded and the outcasts, as did Jesus. Sadly, Francesco added, not everyone understood what he was talking about, and some were strongly opposed, even among some bishops and cardinals.

I assured him that his writings and words struck a deep resonance in the hearts and minds of YTU people and our sister colleges in the University of Divinity. Many of the teaching staff at YTU and Catholic Theological College were students or worked in Rome during the Second Vatican Council, and were inspired by the astonishing renewal in Scripture studies, moral theology, church history, canon law, philosophy and church social teaching.

Many people felt that Francesco’s initiatives reignited the enthusiasm we once felt with Pope John XXIII and Vatican II.

That was very heartening, said Francesco, since unless more people had a better grasp of Scripture, how and why the Church kept changing over history, and how teachings developed in response to the needs of the time, they would find it hard to understand how important synodality is for renewal in the Church. He explained that he was inviting everyone to learn to critique their life situations, to reflect prayerfully (to ‘discern’) what God’s Holy Spirit might be urging, and then to decide how to change things for the better.

He said this was a process followed in the Latin American Church over the last fifty years. It was linked with the ‘see-judge-act’ method developed by Canon Joseph Cardijn a century ago so that young workers could be strengthened by reflecting on the Gospel to support one another in their
struggle for human rights and social justice. It was a method of personal and social empowerment. Francesco added that he structured many of his own documents explicitly on the see-judge-act method.

I told him that Australia had also experienced Cardijn’s Young Christian Workers Movement which was very strong in Melbourne and beyond from the 1940s. Many of the women and men in the YCW became leaders in church and civil organisations.

Francesco said he had heard that one of the YTU students at the University of Divinity, Stefan Gigacz, had written a remarkable thesis on the life and impact of Cardijn, and asked if he could have a copy. I replied it was awaiting publication, but was available online at
http://theleaven.com.au/ .

Francesco was very happy that YTU and CTC were part of the University of Divinity. He said he too tried to cooperate as fully as possible with other churches and faith traditions, building personal friendships with leaders, respecting differences, listening to one another, and trying to see through the eyes of others. We all have things to learn from others.

Francesco was also delighted to hear that for many years YTU and other colleges have offered units on indigenous issues. He was especially pleased that the University has now established a special Indigenous Studies Centre. He knew from his own experience in Latin America and the Amazon Synod that Indigenous peoples still suffered greatly from colonisation and its consequences. He considered it vital that they take their proper place at the table, with their cultural treasures and stories, and sharing their insights into the ecology of their lands. He hoped all Australians would embrace the 2017 Uluru Statement from the Heart.

Francesco asked what our University colleges were doing to promote awareness about other great social issues confronting us. He wanted to know if his social encyclical on the climate crisis, Laudato Si’, was being taken seriously in parishes, schools and everywhere. He had prepared the document in consultation with leaders of other Churches, particularly the Greek Orthodox and Anglicans, as the crisis called for decidedly ecumenical and inter-faith responses. He recently instituted a seven-year process of practical action to avert global warming, and asked if YTU and CTC, and perhaps the University of Divinity, were adopting this Laudato Si’ Action Platform, as many other universities were doing.

He considered the threat of ‘catastrophic’ climate change absolutely critical, and was very worried that the Glasgow Summit might fail. Francesco was surprised that Australia, with all its expertise and resources, was such a laggard in addressing climate issues.

Underlying the threat of ecological disaster, Francesco said, was the astonishing and growing inequality among peoples, where some individuals had wealth estimated in the hundreds of billions of dollars, while millions of others were desperately struggling to survive. When writing Laudato Si’, he had worked closely with leading experts designing the UN Sustainable Development Goals, and strongly supported international efforts to reduce hunger and poverty. In many documents, Francesco said he had indicted the extreme free-market ideology, often called ‘neoliberalism’, that was distorting economies everywhere and driving increasing inequality.

Francesco foresaw a promising future for the colleges within the University of Divinity, advancing ecumenical collaboration in helping tackle, under the inspiration of the Scriptures, the unprecedented threats to human wellbeing and life on our planet. He asked if we would pray for him.

With a background in economics and politics from the University of Sydney, Bruce began teaching in history and social justice studies at Yarra Theological Union in 1986 and over 35 years taught units on Catholic social thought and movements in Australia and overseas, on Liberation Theology, Marxism and Christianity, and war and peace studies.

He was also a member of the Melbourne Catholic Commission for Justice, Development and Peace from 1994 to 2007, and worked part-time with Catholic Social Services Victoria from 1998 to 2007.

He helped found Social Policy Connections as an ecumenical social justice organisation in early 2005, with board members from Anglican, Catholic, Salvation Army and Uniting Church backgrounds. Bruce became director and Mr Peter Whiting president. Its office moved happily into the renovated Study Centre at YTU in 2008. SPC published a monthly online newsletter with six or seven articles a month on current affairs and organised regular public forums and events. Over 16 years, SPC published more than a thousand articles before it closed in 2021.

With encouragement from the Melbourne College of Divinity, SPC established the Yarra Institute for Religion and Social Policy in 2008, with Bruce as the initial Director and former deputy prime minister, Mr Brian Howe its patron. It commissioned research on a range of major issues resulting in book publications. The new University of Divinity reconstituted the Yarra Institute as the Centre for Research on Religion and Social Policy (RASP) in 2016, funding a part-time director to coordinate its work.

Bruce supervised two significant doctorates: one by Dr Race Mathews, with Dr Austin Cooper co-supervisor (2008-13), published by Monash Publishing as Of Labour and Liberty: Distributism in Victoria 1891–1966: and the other by Dr Stefan Gigacz, The Leaven in the Council: Joseph Cardijn and the Jocist Network at Vatican II, published online at http://theleaven.com.au/.

Bruce has been appointed an Honorary Research Fellow within the University of Divinity and intends to continue to write on the interplay between religious views and current social and economic issues.