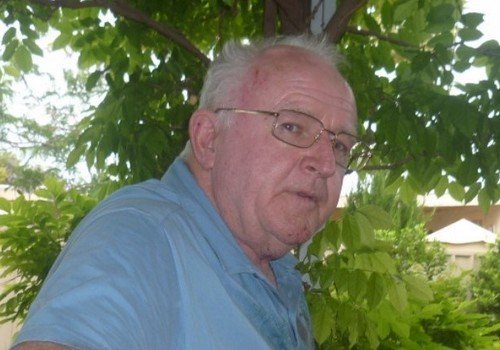 This month we farewell Fr Chris Warnock, a former YCW chaplain from the Port Pirie Diocese in South Australia, who died on 3 March 2021 after a long battle with Parkinson’s Disease.

All our condolences to his sister, Anne Jennings, brother Matt, both former YCW leaders, and all Chris’s family and relatives.

Watch the beautiful eulogy by Chris’s sister, Claire, (start 15:00) and homily, by Fr Jim Monaghan (32:30) in the video of his funeral mass below.

Below we also share a meaningful remembrance of Chris by Locky, another former YCW leader from Port Pirie.

In memory of Father Chris Warnock

I came to know Father Chris Warnock through the Whyalla Young Christian Workers, particularly after I became engaged to parishioner and YCW member there. The YCW often met at Father Chris’s and I found him easy and witty company, comfortable with the diversity of regular attendees including a surprising number of openly gay people, just as comfortable in their own skin – I came from Port Pirie which had no gay people at all, we only had to deal with the likes of the Solomontown football club.

I went on to become very involved with YCW under Margie Lee’s guidance in ‘Pirie and so dealt with Fr Chris on a couple of levels, particularly as he supported the Whyalla YCW in its critical investigation into the industrial death of my would-be father in law, Les Kemp. Whyalla YCW’s enquiry was in-depth and far reaching, affecting both BHP’s Australian operations and State legislation around dangerous work practices after it was shown that Les Kemp was the third person to die in the role he was “promoted” into.

It should be understood that the teenagers undertaking this review did so with determination and courage in what remains a regional city overwhelmingly dependent on that steelworks as the major provider of jobs and family security. Today’s YCW members would be surprised to know that in their parents’ time, a family man’s response to being put in a life threatening job was to quietly invest in three life insurance policies and just get on with it, hoping to beat the odds as Les did before he died in his early thirties of a work related brain aneurysm.

Whyalla were lucky to have the wider YCW network, absolutely. However, on a more immediate level, they were definitely blessed to be able to rely on the full support and guidance of Father Chris during what became months of discovery, growing awareness, lobbying and change. YCW Whyalla had a real impact on the evolution of how South Australians were to view workplace health and safety expectations.

Writing now, as an adult and a parent of teenagers, it is easy to see how that work would have never progressed to an unforeseen and important success without the unifying help and steady influence of Father Chris in the background. Chris unprepossessingly found space, printing, phone services, encouragement and prompting, and he had the humility of his deep faith to stand back to give young people the full sunshine of the satisfaction they found in helping others in a good cause.

Forty years later I still remember this as work which penetrated where no industrial union or any other mature group I can think of at the time even ventured, let alone made a mark. And a key person I can point to in demonstrating the real core value of selflessness in getting people to turn up, making coffees and saying “alright, what’s next?”, is Father Chris Warnock.

Much, much later, “to the amazement of everyone including me,” as Chris himself said, I was fortunate enough to snare someone far too good for me and marry them, with Chris doing us the honour of officiating at St Laurence’s one beautiful day in Adelaide over 30 years ago. More recently, Chris also christened our two children, Louise and Laurence back at the Cathedral in Port Pirie, despite the evident effects of Parkinson’s, which he explained prior to proceedings with great humour.

In between times, we also caught up with Chris when visiting our farming friends in Caltowie around the time he had to give up driving and move into gofers, the first of which he was already cheerfully personalising whilst still using the car (much to the concern of Jamestown locals).

Quite a few times since visiting him at home there, I have reflected on how solitary a life in God’s  rural service must be. That was never a complaint of Chris’ – nothing was – and he had his own ways of dealing with it: Certainly if you said you were having a barbie anywhere within earshot, you’d be wanting to bank on a couple of snags for Father Chris.

I have always respected and admired Father Chris as a straight talking and learned fellow traveller, keenly aware of our shared humanity and shortcomings despite the great differences in our lives. In the all too few times we have been able to see Chris since his illness took hold, he remained droll, positive and accepting of his terrible affliction.

Whilst his suffering is finally over, my wife Evelyn and I will continue to miss the Father Chris Warnock we came to know so many years ago. We are grateful for his time among us and we trust that God has at last given him true peace and heavenly contentment.

Vale, Chris. Say g’day to Les from me.

With our love and affection,