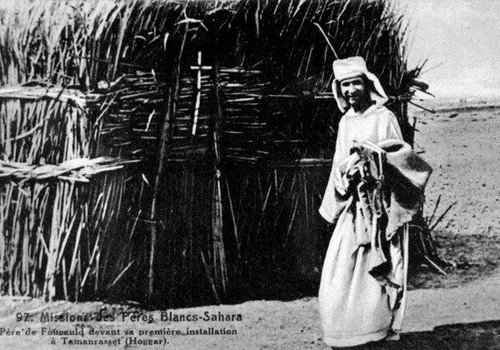 On 15 May 2022, Pope Francis canonised French mystic, Charles de Foucauld, a former soldier who lived in the North African desert for many years devoting his life to the Indigenous Taureg peoples.

Today, Charles de Foucauld is regarded as a pioneer of interreligious dialogue, witnessing to his faith through his quiet example, without words, living it out through deep prayer and friendship and service to the people he came to know.

Pope Francis also referred to the example of Charles de Foucauld in his 2020 encyclical, Fratelli Tutti:

Yet I would like to conclude by mentioning another person of deep faith who, drawing upon his intense experience of God, made a journey of transformation towards feeling a brother to all. I am speaking of Blessed Charles de Foucauld. Blessed Charles directed his ideal of total surrender to God towards an identification with the poor, abandoned in the depths of the African desert. In that setting, he expressed his desire to feel himself a brother to every human being, and asked a friend to “pray to God that I truly be the brother of all”. He wanted to be, in the end, “the universal brother”. Yet only by identifying with the least did he come at last to be the brother of all. May God inspire that dream in each one of us. Amen. (Fratelli tutti, 286-287)

In Belgium, the Little Sisters of Nazareth based their own charism on that of both Charles de Foucauld and Joseph Cardijn.