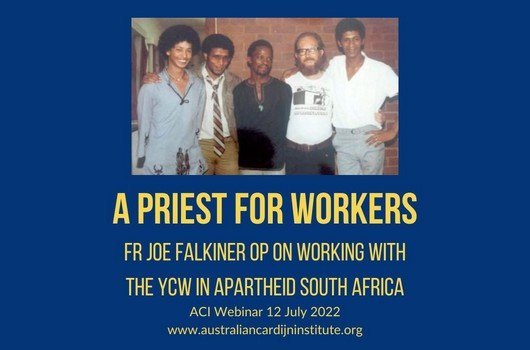 He shared his experiences of working with the YCW during the era of the apartheid system in South Africa.

Watch the video above. Former South African YCW chaplain, Fr Joe Falkiner op, will be our speaker for our next ACI Webinar entitled “A Priest for Workers” on Tuesday 12 July 2022 at 7pm AEST.

Last year, Fr Joe published his memoirs in a book of the same name in which he recalled his many years of work as chaplain of the South African YCW movement under the apartheid regime during the 1970s and 180s.

South African Dominican priest, Fr Joe Falkiner op, was born in the town of Springs in 1934. After completing high school with the Christian Brothers, he studied geology at university.

After this, he began work with the Anglo-American Corporation mining conglomerate, which sent him to Tanganyika (now Tanzania). Through this work, he saw the terrible way in which black workers were treated by their employer, eventually leading to his resignation and search for his vocation.

In 1962, he applied to enter the Dominican Order, joining their community at Stellenbosch in 1963, leading to his ordination in 1969.

Soon after joining the Dominicans, he came into contact with local teams of the South African YCW. As a priest in a parish from 1970, he began a greater involvement with the movement, setting him on the path to eventually becoming national chaplain.

Fr Joe’s memoirs tell the story of this sometimes dangerous work, under the surveillance of the security police, at the height of the apartheid regime.

Title: A Priest for Workers: Fr Joe Falkiner op on working with the YCW in South Africa under apartheid 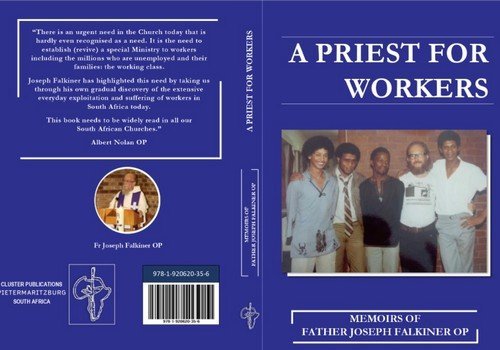 Born into a middle-class family in the goldmining town of Springs, Joseph Falkiner grew up regarding the established order of racial segregation — and separation of township residents and migrant workers in the hostels — as a natural way of life. As he grew older, he realised that this perspective, from a position of privilege, wasn’t natural at all, and so Joe made it his life’s mission, chosen for him by God, to fight this established order — to become, as the book’s title promises, “a priest for the workers”. In his memoirs, Fr Falkiner recounts this ministry of over half a century.

Fr Falkiner has served working-class people in many ways, most notably through the Young Christian Workers (YCW) movement, which was founded in the 1920s in Belgium by Fr Joseph Cardijn, and now so sadly largely dormant in South Africa. But before he got there, and to his vocation as a Dominican priest, he had to make a secular journey of eye-opening experiences.

The first awakening was a posting in the 1950s as a prospecting geologist for Anglo-American in Tanganyika (now Tanzania), where he was in charge of a group of rural workers who were subjected to merciless corporate exploitation. This was followed by a stint of diamond prospecting in Namaqualand, where he lost all respect for his employers and, indeed, all corporations of their kind. Both experiences guided Catholic-raised Joe to work for God instead.

Fr Joe and the pope

In 1962, at the age of 28, he joined the Dominican order; he would be ordained on December 13, 1969 — on the very same day, Jorge Mario Bergoglio, now Pope Francis, received his holy orders in Argentina.

While studying at the Dominican priory in Stellenbosch, with its prevailing spirit of social justice, Joe was conscientised further. Ministry with working-class youths from the local coloured community led to his involvement with YCW, then a potent movement in South Africa with its See-Judge-Act method, which puts the “Gospel into action”.

Fr Falkiner explains this method, which also guided people like Archbishop Denis Hurley, in vivid detail — in the memoirs section of the book as well as in the illuminating appendix, which also outlines the Church’s Social Teachings, the Theology of Work, and work through the lens of Scripture.

God guided Fr Joe into other areas of activism, such as the nascent black trade unionism, which pre-1976 was a primary arena of the struggle against apartheid. As a priest in KwaThema, he had a hand in the first case in South Africa in which dismissed non-striking workers of colour, in this case at the Raleigh bicycle factory in Brakpan, successfully sued for their reinstatement. The day after the court judgment, there were queues of people wanting to join YCW. And this increased membership led to the establishment of several unions — whose meetings would always begin with a prayer.

The ascendancy of Cosatu as the dominant union federation meant that faith-based worker activism would be frozen out. As a result, Fr Falkiner notes, history has ignored the pivotal role of YCW in the rise of black trade unions.

The regime certainly did not ignore YCW, whose members were routinely detained. At one point, Fr Falkiner recalls, police minister Jimmy Kruger singled out YCW as one of apartheid’s three greatest enemies. The 1988 bombing of Khanya House, the SACBC’s Pretoria headquarters — also mentioned in the book — showed just how much the regime saw the Catholic Church in general as a threat.

In the post-apartheid era, YCW faded away, for various reasons which Fr Falkiner outlines. But, as he explains, the See-Judge-Act method is still being used and promoted today.

As good memoirs do, this one name-checks important people whom the author encountered in his journey. Four notable representatives of Catholic Social Teachings activism stand out: the late labour leader Eric Tyacke; Sam Ntuli, an activist and convert who was assassinated in 1991; and the late Roddy Mzwandile Nunes and John Capel, who successively coordinated the SACBC’s Commission for Church and Work, until it was arbitrarily closed down in 2002, despite having sufficient funding (that decision put an end to the annual Workers’ Sundays).

Fr Falkiner runs through his life briskly, in short chapters. It is difficult to put this readable book down. Despite its weighty themes, there is some light relief in occasional anecdotes, including one in which Fr Joe finds himself propositioned by a prostitute. But Fr Falkiner doesn’t dwell long on personal matters: the author keeps the focus firmly on his ministry and God’s presence in it.

A Priest for Workers can be ordered at R200 ($A18.50 plus p&p at www.cluster-publications.com/store/a-priest-for-workers-memoirs-of-father-joseph-falkiner-op/

A Priest for Workers Looks Back (Southern Cross)

Thanks to Gunther Simmermacher and Southern Cross for permission to reproduce this review.