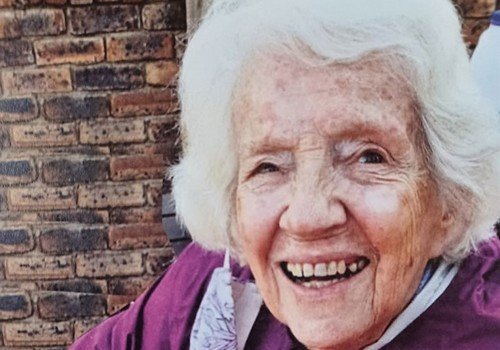 Jean Tyacke, who came to South Africa from her native United States as a YCW extension worker, has died in Johannesburg, just a few days before her 95th birthday.

“She might have been the last of the giant Young Christian Workers-trained unionists active in the apartheid era,” writes Paul Goller in the South African Southern Cross magazine.

Jean was born in the United States in 1927 and came to South Africa in 1959. Engagingly she retained her accent over the rest of her life. But, more characteristically, she continued her voting for Democratic presidential candidates up to Joe Biden.

In Chicago, probably her favourite city, Jean came to YCW early, after having been very active in Young Christian Students In her schooldays. Even then, she said, she saw herself more as a teambuilder than as a dominant leader; the apartheid regime came to dislike both.

In 1961, Jean married Eric Tyacke, founder of the South African branch of YCW in 1949 and the Urban Training Project (UTP). They lived in Robertsham until their retirement in 1987. The non-racial parties they hosted were surely the scandal of the neighbourhood. They didn’t, one suspects, make their children’s lives at the local government school any easier.

With journalist Sydney Duval and others, Jean participated in the drafting of the SACBC’s seminal 1972 pastoral letter condemning apartheid, “Call to Conscience”, and its subsequent study materials.

She also took part in the launch of the YCS adult Family Social Action movement.

Jean’s home was raided by the security police as early as the late 1960s; the Anglican dean of Johannesburg had been charged with participating in an alleged African National Congress plan to overthrow the government by force. Jean’s YCW heritage, building on her Catholic Christian faith, would not have let her fall into that trap.

From 1976, for more than three years the Tyacke family lived under the full rigours of the banning system, which attempted to destroy most aspects of its victims’ work, social and activist lives. Percy Qoboza, the YCW editor of The World wrote of Jean and Eric: ”Take heart, you two beautiful people: you do everything possible to bridge the growing gap between black and white”.

Jean worked at Wits University — after the employment element of her banning was challenged — and into the 1980s. She was able to see the education of her daughters Kathy, Teresa and Sheila continue into socially committed professions at Wits during this period.

Jean was employed at UTP only intermittently; but in 1999 the late Donovan Lowry found her help invaluable, not only in proofreading his authoritative history of UTP but also in adding to and even shaping his research material.

In a letter to Eric and Jean on their retirement in 1987, Archbishop Denis Hurley of Durban had summed up their working lives: “What a contribution you both have made in the building up of the worker movement in South Africa. You, and some others like you, have with great dedication, maintained links between organised Church and the worker. Thank you and God bless you for that.”

Reuben Denge, the director of WEP, the organisation that succeeded UTP, said upon hearing of Jean’s death: ”She really contributed immensely in the development of the labour movement in South Africa.”