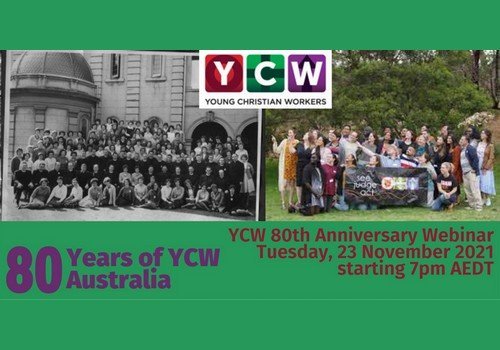 On 23 November, the Australian YCW, the Cardijn Community and ACI will present a webinar to commemorate and celebrate the 80th anniversary of the foundation of the movement in 1941.

Keynote speaker will be Bill Armstrong AO, former YCW leader from Victoria, who later had a distinguished career in international development

Responding to Bill will be Marilyn Bellett, current president of the Australian YCW.

Register for the event here:

Bill grew up on a sheep farm in Alexandra, central Victoria. He studied at St Bede’s College Mentone before taking up an apprenticeship in Fitting and Turning.

From 1958 till 1963 he worked for the YCW and also managed to play two AFL league games for Carlton Football Club.

In 1964 he began a career in international development with the newly formed OSB (Overseas Service Bureau, later to change its’ name to Australian Volunteers International).

In the 1970s Bill was National Co-ordinator of the Churches International Development Education Program, Action for World Development (AWD).

He is a life member of AVI, ACFID and Action Aid Australia.

In 1995 Bill was presented with a Friendship Award by the State Bureau of Foreign Experts, People’s Republic of China and in 2000 he was the recipient of the Sir Edward Weary Dunlop Asia Medal, “In recognition of his significant contribution to forging stronger relations between Australia and Asia.”

Marilyn is from Sydney where she obtained a Bachelors Degree in Biodiversity and Conservation from Macquarie University.

While in high school, she belonged to the YCS in Parramatta Diocese before later joining the YCW. In 2018, she worked for the Australian YCW as a youth engagement officer in Melbourne and later in her home diocese of Parramatta. She has also worked for Catholic Mission.

Currently, she is national president of the movement.

Marilyn Bellett, The work of the YCW in light of the Synod on Young People