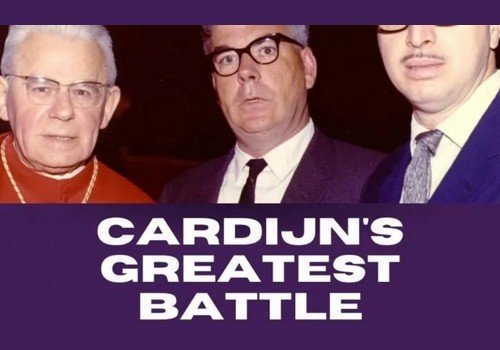 This month marks the 60th anniversary of the opening of the Second Vatican Council on 11 October 1962.

Many will know that Cardijn played several roles at the Council, initially as a member of the Preparatory Commission on Lay Apostolate, then as a peritus in the conciliar commission and finally as a Council Father after Paul VI made him a cardinal in February 1965.

In addition to the above, in July 1963, he published his influential book “Lay People into Action,” which was translated from French into five languages.

Finally, – and perhaps most significant of all – was Cardijn’s role as the centre of a network of 250 jocist bishops, who had all been formed by and/or had personal experience as chaplains of the YCW, YCS and other Specialised Catholic Action movements.

All this may make it seem as if Cardijn had an easy time at the Council. Nothing could be further from the truth! In reality, Vatican II would prove to be the greatest battle of his life.

At the age of 80, Cardijn found himself called to explain and promote his conception of the “specifically lay apostolate of lay people” as distinguished from the “apostolate of the faithful” common to all the baptised. It was a distinction that many theologians and bishops who had no personal experience of the Cardijn movements failed to grasp. Indeed, I would argue that many still fail to grasp it!

Yet, as the documents of Vatican II attest, Cardijn and his colleagues were ultimately successful in their endeavours as evidenced by §31 of Lumen Gentium, which made clear that “the laity, by their very vocation, seek the kingdom of God by engaging in temporal affairs and by ordering them according to the plan of God.”

In this month’s webinar, Stefan Gigacz explains the struggle that Cardijn and his network faced in their efforts to achieve this.

Originally from Melbourne, Stefan worked for a short time as a personal injuries lawyer. While at university, he became involved in a local parish YCW group. In 1978, he became a fulltime worker for the movement, working in Melbourne, Brisbane and Sydney and later for the International YCW.

Later, he completed master’s degrees in canon law and legal theory. From 1997-2000, he coordinated an international project to document the history of the YCW before taking up a position as a project officer with the French Catholic development agency, CCFD-Terre Solidaire. From 2006-2008, he worked as a pastoral worker in a Melbourne Catholic parish. Since then, he has worked as an editor and journalist for a series of Catholic online publications.

From 2012-2018, he worked on his PhD thesis on the role of Joseph Cardijn at the Second Vatican Council, now published under the title “The Leaven in the Council: Joseph Cardijn and the Jocist Network at Vatican II.” He now resides in Perth, Western Australia, where he devotes his time to the development of the Australian Cardijn Institute.