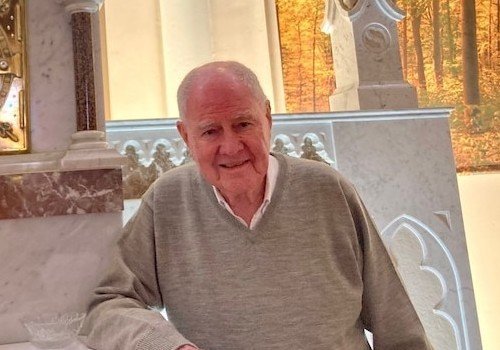 At St Patrick’s Cathedral, where he is Associate Pastor, Father Hal, 87, leads mass, or “meetings of the team” as he calls it.

“The game is out there in the world,” he said.

“You get the team together to kind of re-align yourself with the spirit of the team, listen to the word of God and talk about it a bit.

“Then you go out the door to live that out in the nitty-gritty of the real world.”

Father Hal puts his reluctance to retire down to a meeting many years ago with Belgian Cardinal Joseph Cardijn, who was 84 when he said to him, “If you’ve got the health and the energy and a bit of adrenaline, then why not?”.

He remembers his mother taking a job at Toowoomba’s Willowburn Mental Asylum to work with “the broken, isolated people the rest of the world didn’t want anything to do with”.

Father Hal says being there for the “battling people looking for meaning in their life” became a theme in his life, but also pitted him against the Catholic Church’s rigid traditions.

“There were times I seriously thought about how I can really live meaningfully and peacefully and with energy in the system, so I rebelled a bit against it,” he says.

“But I was never tempted to throw the whole baby out with the bath water.”

Father Hal believes the biggest barrier between the church and the people it wants to connect with are the churches themselves.

“This will come across as a bit of a heresy, but I think the building that we’re sitting in and other church buildings and the institution that the church has kind of got itself locked into is almost foreign to the gospel,” he said.

“I really don’t think Jesus, if he were here today, would be building churches.

“If there is value in gathering big groups of people, then use the town hall. Once you build something like this, I think it gives a message of being cut off from the rest of the world.”