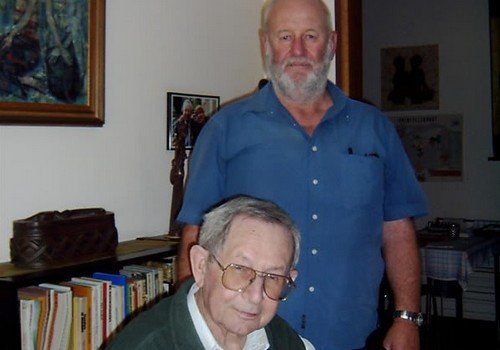 ACI board members have made founding president, Kevin Vaughan, a life member of the institute following his resignation from the board at the beginning of December.

“I would like to express my personal thanks to Kevin for all the encouragement he has given to me since we first met in Paris in 2006,” added secretary Stefan Gigacz.

In late 1958 Kevin was asked to help start the YCW in Highett, not long before Cardijn visited Melbourne, where he addressed a rally at the old Olympic Swimming Pool (now a training centre for Collingwood Football Club).

“The founder of the YCW Joseph Cardijn paid a visit to Melbourne later that year 1958, and we all went into the city to hear him speak,” Kevin wrote, “it was exciting to be amongst so many young people and to hear the great man speak and show so much faith and confidence in young people.

“Our leaders group was at the top row on the left in this photo (see below). We were really inspired and could not wait to start our branch of the movement early the next year, 1959.”

Indeed, over the next decade Highett YCW became a leading centre of the movement, forming a series of leaders and fulltime workers who went on to make major contributions in various fields.

Kevin himself went on to a career as a firefighter and trade unionist. After suffering a work-related injury, he became a passionate activist for the rights of injured workers.

It was while recovering that Kevin re-read Cardijn’s book Challenge to Action. He was struck by Cardijn’s insistence on the need for an adult Christian Worker movement.

“The fact that apostolic movements up to the present day are principally being put into action by young people, does not lessen the importance of, and the urgent need for an apostolate among adults,” Cardijn wrote, “unless such an apostolate exists, all the efforts of the young people will lead to a dead-end.”

In 2018, Kevin took on the further challenge of the role of founding president for ACI, a role he continued in until health concerns caused him to resign.

The board also passed a resolution thanking Kevin for his contribution.

Kevin Vaughan with Alex Ericx, extension worker in Africa for the International YCW and collaborator with Cardijn.