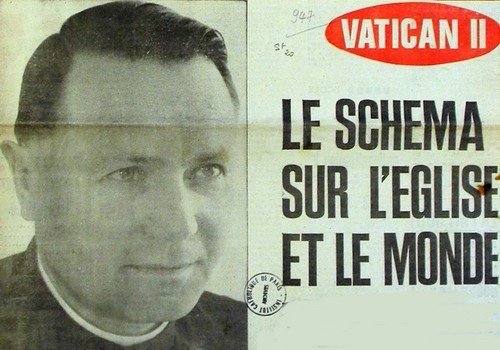 French priest, Pierre Haubtmann was the chief redactor for the groundbreaking Vatican II document, Gaudium et Spes, the Pastoral Constitution of the Church in the World of Today. Next month marks the 50th anniversary of his tragic death in a bushwalking accident on 6 September 1971.

Long before he became a peritus at the Council, he was a chaplain for the JOCF, the Girls YCW, in the Paris suburb of Meudon. Later, he became a national chaplain of the Action Catholique Ouvrière, the Workers Catholic Action movement that is the adult counterpart of the French JOC. Haubtmann also worked closely with other Specialised Catholic Action movements including the Action Catholique des Milieux Indépendants, a movement for Catholic professionals and business people.

This experience was certainly critical in his appointment to take charge of the compiling and editing of the final version of Gaudium et Spes, which applies the Cardijn see-judge-act method.

As Haubtmann noted himself: “With respect to each question, we begin with facts (previously ‘signs of the times’); we judge them; and we derive various pastoral orientations. This method was explicitly desired by the competent bodies; it manifestly corresponds to the will of the overwhelming majority of the Fathers.”

ACI is thus pleased to present a special webinar honouring Pierre Haubtmann. Mgr Philippe Bordeyne, outgoing rector of the Catholic Institute of Paris, and soon to commence as president of the John Paul II Pontifical Institute for Marriage and the Family at the Lateran University in Rome, will be our guest speaker.

Mgr Bordeyne is himself a specialist on Gaudium et Spes, having written his PhD thesis on the significance of the concept of “anguish” in the Pastoral Constitution. He has also written articles on the life of Pierre Haubtmann.

Clara Geoghegan, co-director of the Siena Institute and executive secretary of the Australian Catholic Bishops Conference, will be our respondent.

REGISTER FOR THE WEBINAR

From Vatican II to the Synod on Young People