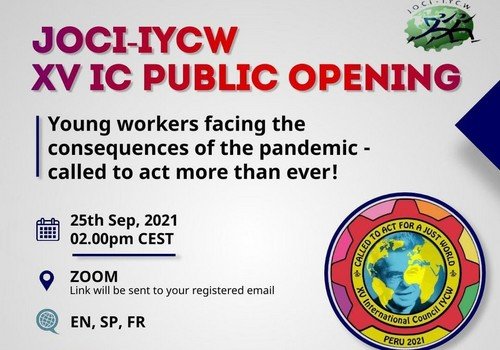 Holy See Secretary of State, Cardinal Pietro Parolin has written to the Brussels-based International YCW on behalf of Pope Francis for the movement’s postponed international council, which was finally held via Zoom last month.

“His Holiness trusts that in this time of economic and social crisis, the Council’’s deliberations will reaffirm the efforts of young people to advance the Kingdom of God through the building of a more just and equitable society which leaves no one behind and which promotes respect for the fundamental rights of all, including that of safe and dignified employment,” Cardinal Parolin wrote.

In May 2020, Holy See Substitute, Archbishop Edgar Peña Parra, also wrote to the IYCW for the council, which was initially planned to take place in Lima, Peru in August 2020.

“His Holiness assures the delegates of his spiritual closeness as they share their experience of the challenges facing today’s youth, especially in the context of the grave social and economic repercussions of the coronavirus pandemic,” Cardinal Parolin wrote.

“He prays that their deliberations will promote efforts internationally to raising awareness and respect for the dignity and rights of working people and to rejecting the culture of waste.

“He likewise encourages the apostolate of YCW to help young Christians to grow in closer spiritual and practical solidarity with their brothers and sisters, particularly in the poorest countries and with those who struggle to find employment, so that young people everywhere may have the opportunity to encounter Jesus Christ in their work and to sanctify their lives by contributing to a more just and fraternal world.”

During the Council, each national gave a presentation of its action

The two movements are continuing to dialogue and collaborate on various projects and actions, including common celebrations for Cardijn’s birth anniversary and representation at the ILO.